It was the first time the Primary School had taken part in the scheme which has been running annually since the mid 1990s, seeing tens of thousands of youngsters take part to raise funds for their school and Football in the Community.

This morning Jordan Ferrer, Assistant Community Manager, presented participants with medals, certificates of achievement, match tickets and Football in the Community footballs – along with Sammy The Stag, who also presented youngster Jonah with a signed shirt from the first team players, after he raised the most money individually of £190.

Beverly Fearnley, Sports Leader at Jacksdale Primary School, said “The teamwork and the skills that they’ve learned is fantastic, and the element of the whole school being involved is amazing.”

Mrs Fearnley continued “As we are a small school, to get this amount is absolutely incredible – we’re totally blown away by it.

“We are very much trying to encourage the children to be more active in their daily lives because it has so many benefits, the kids have really responded well to the sessions.”

Jordan Ferrer, assistant community manager, added “We’ve really enjoyed coming to Jacksdale School, it’s been a school we haven’t visited before – we’ve had a really good reception and a great response from the kids.

“We’ve had maximum effort from all involved and some really good outcomes, They’ve done a fantastic job – which just shows the amount of effort and enthusiasm the children have put in to it.” 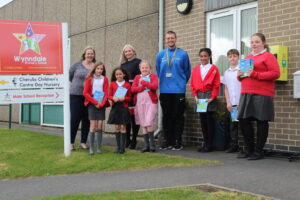