Hoodwinked 2018 is a trail through the heart of Nottingham to find the 33 robins that are “a modern-day take on the traditional stories of our mischievous outlaw outwitting the Sheriff of Nottingham with skills of camouflage and cunning.” with a number of name relating to Nottingham such as “Ay up me duck”, “Lacework” and “Goose Fair, Goose Fowl”.

Today, we took the kids on the trail in 2 different groups to see which group could find the most robins. They 2 groups set off in different directions as the trail can be done starting from any of the 33 robins. They both took their maps and set off for 2 hours before meeting again in the Old Market Square for lunch and then continued along the trail for another 2 hours.

During our walk to find the robins, we also found some of Nottingham’s biggest tourist attractions such as the lions outside of the city hall and the Brian Clough Statue (that Fez insisted his group have a photo with.)

In the end, it was Gaz, Lynky and Liz’s team that found the most robins as they managed to find 32, whereas Macca and Fez’s team found 30. But it was a great effort from both teams, well done guys!! 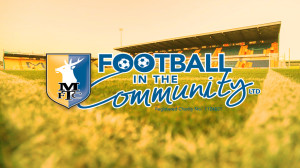 Football in the Community to support #HelloYellow campaign

Walking Football sessions to launch at the RH Academy