Alex joined us in September 2016 after completing his GCSEs at The Dukeries Academy in Ollerton. Alex has always loved football and having the opportunity to study full time for Btec Extended Diploma in Sport and be able to train every day and play in a Futsal league really interested him. So he applied and was accepted on the course.

Throughout his 2 years with us Alex has demonstrated a really hard working and organised attitude in the classroom. This was particularly important for him studying the Extended Diploma as it meant he had to put aside more of his own time outside the classroom to meet his deadlines.  He is leaving us with an Extended Diploma in Sport at grade Distinction Distinction Distinction (DDD). Along with studying for his Btec Alex has dedicated a lot of his time to complete further qualifications to help him on his path of becoming a coach. He has completed both his FA Level 1 and FA Level 2 Coaching courses. He has also completed his AFPE (Association of Physical Education) Course. This is a qualification for coaches who work in schools allowing them to work alongside teachers in delivering physical education in schools. Finally he completed his Futsal Level 1 and Level 2 coaching qualification.

On the Futsal pitch Alex played in the National side and usually played as a goal keeper. If needed, Alex was also able and happy to play in an outfield position.  He really enjoyed training and matches and rarely, if ever, missed a training session.  This allowed Alex to develop his skills and knowledge of the game of Futsal over the 2 years he spent with us.

During the past year Alex has really demonstrated an interest in becoming a coach. He has done some work as a casual coach with our staff for tournaments and helping out with projects in local schools. He has also recently taken his walking football refereeing qualification which has allowed him to assist with the walking football team every Saturday morning.

Alex applied for and has been offered a position with us as an Apprentice Community Coach for the next academic year. We look forward to welcoming Alex back to work with us in September as an apprentice.

Inclusion the focus with Every Player Counts sessions 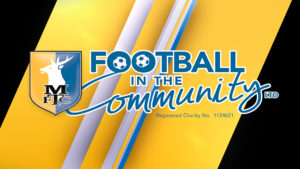 STATEMENT | Closure of One Call Stadium & Football in the Community