After consulting with Mr Edwards’ family, Football in the Community were delighted to launch a brand new Walking Football Tournament in the former wingers name and honour – with the inaugural competition taking part at the RH Academy on Sunday.

Eight teams competed for the title with Manchester City running out as champions, picking up six wins and a draw from their seven fixtures, conceding just once.

Played on a glorious afternoon at the RH Academy, the eight teams, which included two from Mansfield Town Football in the Community, competed in a league format playing each-other once – winner takes all.

Head of Community Mark Hemingray said “I’m delighted that as a community scheme we’ve been able to honour and remember a wonderful gentleman in Walt, and that we’ll continue to do so with what proved to be a very popular tournament.

“Walt was a really lovely gentleman and was not only a joy to work with, but to spend time with – he’s sorely missed by us all and I’m extremely humbled to be able to remember him with this new tournament”

Community Coach Alex Cartwright, who has developed our Walking Football project and organised the tournament, said “I’m delighted with the turn out and the way the competition unfolded, all the teams played competitively but also respected the occasion to contribute to a really brilliant afternoon’s football which I’m sure Walt would have enjoyed.

“I’d like to congratulate Manchester City on winning the cup, and thank everyone involved for setting the bar high – I’ve already taken a number of emails and phone calls asking about the next tournament which bodes well for next year’s competition.”

Gary Shaw, Community Manager, added “I was really touched by the way in which each team conducted themselves not only throughout the matches but during the presentation with a well observed minute’s applause for Walt whilst his family walked out to the centre circle to present the cup and winners meddles – I’m sure he’d have been very proud.”

Mansfield Town Football in the Community run Walking Football sessions twice a week, with sessions on Wednesday’s 6-7pm at the RH Academy, and on Saturday’s at the One Call Stadium 9-10am (Non-Match Days) and 9-10.30am (Match Days). Anyone wanting further information should contact Alex Cartwright on 01623 656 920 or email alex.cartwright@mansfieldtownfitc.net

Kick It Out – Let’s kick racism out of football

Bouncing Around at I Jump 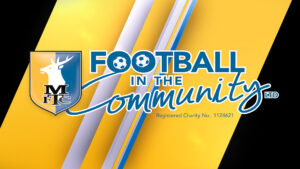